This is in response to a prospective student's question:

We get an average of four missions a year, I'd guess. Almost all missions are big "project" searches. In Maine, the Warden's Service, our uniformed fish and game officers, are responsible for land, river and inland lake search and rescue, and they get as much 500 missions a year. They only need us for the biggest jobs, when a very large land area must be searched, or when they get too many missions at once and so need to "call up the reserves."

I should mention that about 40% of the Maine Wardens are Unity College graduates. Our CLE program trains primarily Maine Wardens, NPS Rangers and US FWS Refuge Officers. We're in the middle of a long term project to beef up the curriculum for SAR and other operational skills, but it may not have changed much by the time you get here.

A typical mission involves a night drive, in a hurry but not too fast, to a search HQ which can be up to six hours drive away, but usually only two or three hours.

The HQ is nearly always set up by the time we get there, and running pretty well using the ICS (Incident Command System). This is because we are in a sense part of the active reserve, and we get called in when it's become obvious the warden's need more help.

In most cases the Unity team acts as an independent unit and is assigned its own search area or hasty search. In a minority of cases, when a lot of ground must be covered, the Warden's split us up and use our most experienced students to be leaders of other groups, generally made up of volunteers, eagle scouts, volunteer fire department people, hunters in season and other kinds of folks. This can get interesting as ad-hoc teams can be undisciplined, untrained, and often there are one or two folks terribly out of shape.

Search areas are rarely easy ground. They're almost always wooded, often quite thick, often steep. There are many hazards. It's more important to be a good woodsman or woodswoman than a mountaineer, but being a bit of a mountain goat is always an attribute.

Line searches are the usual format, but we also often have to do hasty searches to "clear" trails and set search area boundaries.

Many team members are also members of other emergency services, such as volunteer ambulance, volunteer fire departments, police reserves or auxiliaries, Marine Patrol, Coastguard reserves, Army National Guard, and the like. I'd have to say that if you really want a lot of experience, the combination of Unity College SAR with Unity Town volunteer ambulance will do it pretty well.

The team has good morale and cohesion and I would say is one of the leading clubs. Not a day goes by that I don't see a team member in one of our T-shirts and sweat shirts. We just got our own vehicle for the first time, a former Warden's Service king cab truck, and we are making plans to trick it out for SAR. We've had a trailer for many years, and have a pretty well developed gear cache.

The team meets weekly for student-run trainings. As their faculty advisor, they meet with me two or three times a year for advanced trainings, for the MASAR spring training meet, or an annual rigging training. I meet with the team leader most weeks, and represent the college and the team at the quarterly MASAR meetings. I'm also the only qualified mountain or high angle rescue trainer the team has. But I have a lot of other responsibilities, so they don't get to see me as much as they might like to. An improvement would be to add a full SAR class to the curriculum which would automatically give me more time to teach SAR. This is in the works, but has to wait for some other curriculum work to get done first.

There are many other faculty involved, though. Tim Peabody, former Colonel of the Maine Warden's Service, is also an important mentor to the students. He tends to take the firearms and police work side of the job, and leaves the SAR more to me, but he is an expert SAR person too. Carol Blasi, former state attorney for natural resource law, handles the legal end. We also have a very strong adventure education team of Mac McInnes, another Englishman, and Beth Arnold from Outward Bound.

Last year we brought in David "Heavy" Whalley, a British mountain rescue expert, who served with me in the British Royal Air Force Mountain Rescue Service, to do some talks and trainings. Heavy and I and one team member also climbed Katahdin, Maine's highest peak, as part of a rescue weekend at Baxter State park.

That was the definite high point of my rescue year last year.

Anyway, always glad to answer questions. Let me know if you have others. 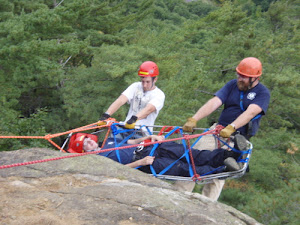